We had a wonderful morning at church, the kids were all dressed up and looked so cute.  Julia joined me and Lawrence is cooking his yummy ham specialty.  May each of you feel God's love and abundant gifts, as I do today. 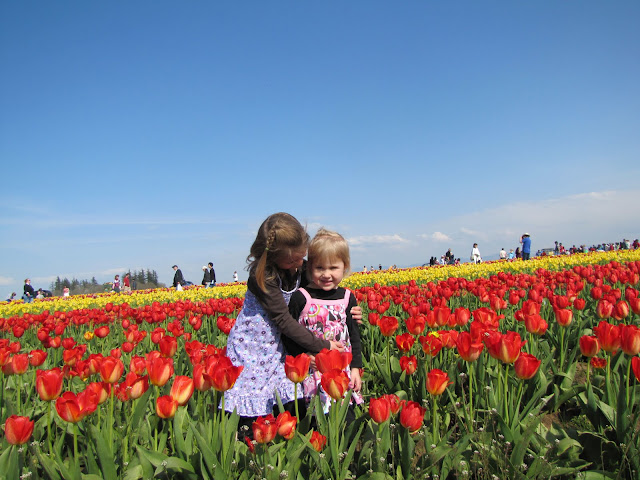 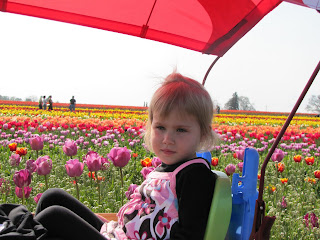 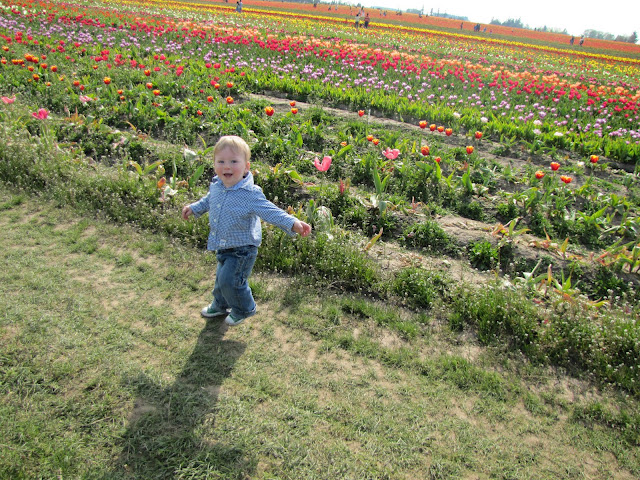 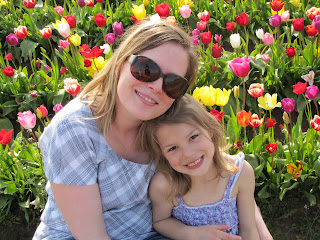 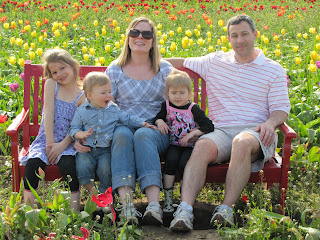 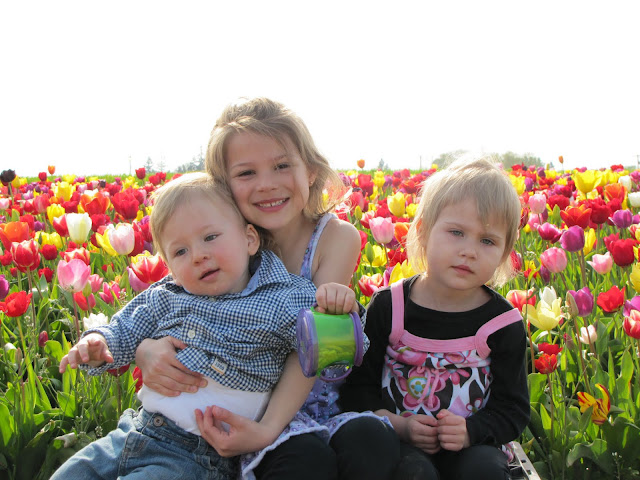 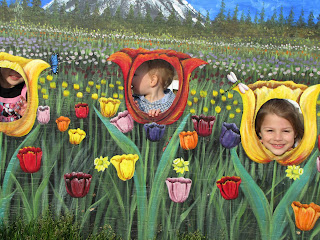 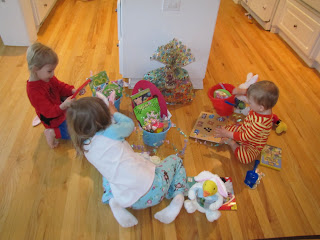 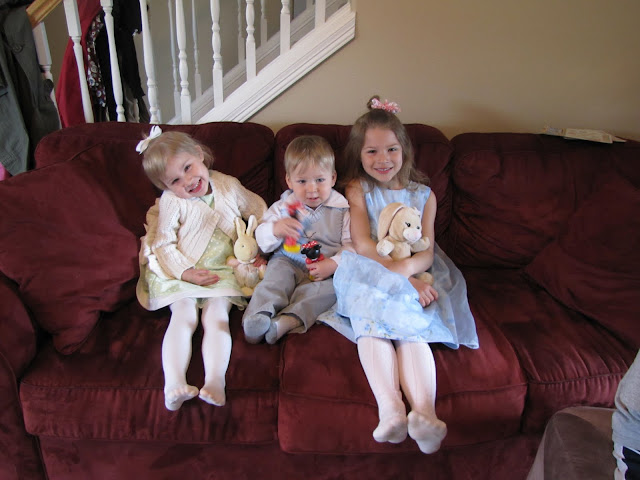 Invitation to the Thirsty

1 “Come, all you who are thirsty,
come to the waters;
and you who have no money,
come, buy and eat!
Come, buy wine and milk
without money and without cost.
2 Why spend money on what is not bread,
and your labor on what does not satisfy?
Listen, listen to me, and eat what is good,
and you will delight in the richest of fare.
3 Give ear and come to me;
listen, that you may live.
I will make an everlasting covenant with you,
my faithful love promised to David.

5 But he was pierced for our transgressions,
he was crushed for our iniquities;
the punishment that brought us peace was on him,
and by his wounds we are healed.
Posted by Jenny at 1:32 PM 5 comments:

Email ThisBlogThis!Share to TwitterShare to FacebookShare to Pinterest
Labels: God is Good, Holidays, I love my family, Life with Three Kids

Yesterday was a big day for the Herman family.  For the first time ever, all members were able to share a pizza and ice cream together!

Addie had a food challenge at the allergist where she drank milk (which by the 3rd serving (1/2 a cc) she wouldn't drink and actually puked up the 3rd dosage, due to milk's grossness), so then ate yogurt in 30 minute intervals at increasing amounts for 6 hrs.  I ran out for chocolate milk after the vomit, but by that time she was doing well with the yogurt so she stuck with that, she has had 2 cups of chocolate milk since.

She was so so excited, and we were excited for her.  She was like a crazy woman last night, so so so happy.  What an amazing blessing it is not to have this worry for her, especially as she goes to preschool and camps this summer.  She is still allergic to peanuts, and we will go back next year to test for that, but next to this milk allergy, that feels so easy to deal with. Today they were baking in her preschool class, how nice it was not to bring something different for her or buy all the Addie safe ingredients for the whole class to use!

I think she places much of her identity in being allergic and having "special" foods, so we were careful to make sure she knew that she was VERY SPECIAL for getting to eat this and that for the first time.  We'll continue with that.

She gobbled up her pizza like nobody's business, I wish I had that on video.  Yay, Addie, we love you very much! 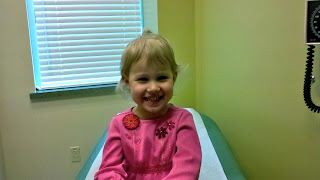 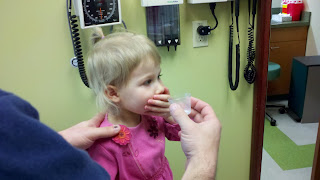 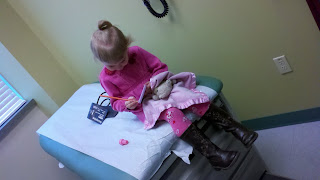 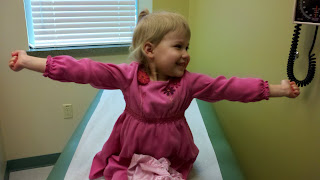 Today my friend said this to me...and it was awesome...

"Jenny, I get how you are feeling. I mean, essentially what you are doing is trying to fit a square peg through a round hole each month. And you whittle the damn square peg down which takes a ton of time and work and you eventually get it through. But you're like, why can't it just be round?!"

Email ThisBlogThis!Share to TwitterShare to FacebookShare to Pinterest
Labels: balance, Friends who keep me sane, Jenny

Wow. A month since I last posted.

I'm seeing a light at the end of the tunnel. An itty bitty teeny tiny light. But a light nonetheless. On Tuesday, I felt like I wanted to blog for the first time in a very long time, that's a good thing, right?

So 16 months, as the header, that's Bryson's age today, if you didn't know.

I'm almost ready to say 1.5 years instead of just one. I can't believe it .  He has like 6 teeth coming in and is a drooley snotty monster who eats all of our perfectly cared for board books.  A monster who says "I love you" and gives real kisses now, but a monster nonetheless.  His love for Mickey Mouse has gotten stronger, and Gma helped that out by bringing him a MM that is the same size as him.  We put an Elmo diaper on Mickey yesterday and I think the kid almost exploded.  We are in the stage of throw yourself on the floor tantrums.  Unlike the big sisters before him, it doesn't infuriate me when he does it.  I often have to turn away to hide my laughter.  He's been taking great delight in eating yogurt, closing his eyes and really enjoying it as you shovel it in.  FUNNY.  His vocab has expanded exponentially in the last month, there isn't a word you can say that he doesn't repeat.  Today the kids and Julia skyped with Bean-Bean and so Sabine got to hear him SAY Bean-Bean for the first time.  How lovely! :)  He said Uncle Matt to Uncle Matt the other day too.  Skyping is NOT easy with the little guy who sees numerous buttons to push and is NOT okay with the fact that they are not there for his pounding, but Julia discovered that the high chair is the perfect place for him to skype! :)  Little guy also got his first black eye this month, running with a cash register in his arms over a pile of pillows. 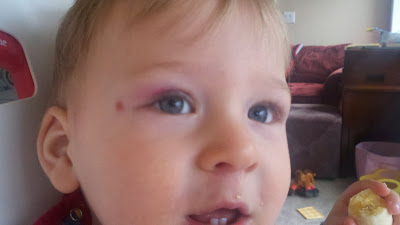 Addie had an allergy test on Tuesday, it was her annual one, a couple of months late, because that's the way things have been going around here. She's had a few exposures to milk in baked goods lately, accidentally of course. We sit with Benadryl and Epi-Pen in hand, with held breath, but no reaction. So we were hopeful, that we would get the results we did. Her milk allergy showed up negative!! After 3 years of it being considered severe anaphylaxis. She hadn't had any accidental milk exposure for 2 years (at which time she vomited profusely and was instantly covered in hives). So a cookie at school and some break with Grandma and Julie with no reaction left us hopeful. On Wednesday she goes in for a 6 hr food challenge where they rub some milk on her skin and give it to her to drink in small increasing increments, 20 minutes at a time, monitoring her vitals the whole time. We are encouraged to bring chocolate syrup because a kid who has never tried milk might consider it quite yucky! :)

Lily is playing Tball and really loves it.  She is quite good too.  You know, for Tball.  Lawrence is coaching and the two of them have really enjoyed some special bonding and growing together.  Her bangs are grown out now, and she got her ears pierced with her Grandma.  She has taken VERY good care of them, and still cleans them twice a day.  I was a little bit disappointed to miss the big event (they did it while I was at work) but I was thrilled that Julia got a video, and my cousin, Rose reminded me that while I didn't share that memory with her, she will have that special memory with her Grandma Carol and wouldn't I have loved to have that with my Grandmother.  So true.  Lily is growing up so fast and is becoming more and more of a beautiful and mature young lady.  She is a DELIGHT to spend time with, and is such a big helper around the house.  When she found out about Addie's allergy test she picked her up and carried her around the house.  She was so excited that LILY might as well have been the one who might get the chance to taste Ice Cream for the first time.  It was so sweet.  Here is the video of her ears: 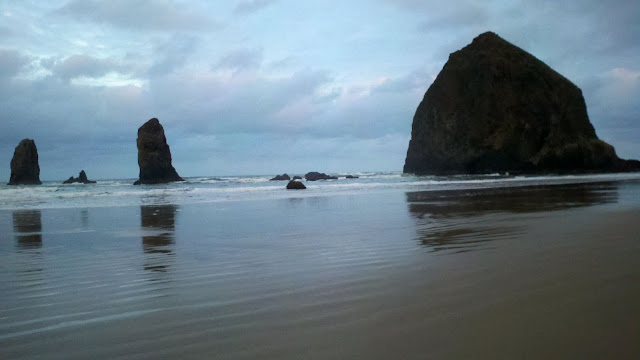 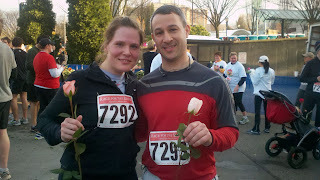 I went to a women's retreat with my church to Cannon Beach last weekend and it was amazing.  I was reminded AGAIN, how much God loves me, no matter where I am at in my life, no matter what I am struggling with, no matter.  I don't have to do anything to get this love, I don't deserve it, I don't have to work for it, it just is.  It's hard to wrap my brain around that, and I can only imagine a sliver glimpse of it through the love from my mother and the love I have for my kids.  I went for a run on the beach and it was just amazing.  The waves, Haystack rock, the music in my headphones, God's love surrounding me, the majesty of the oceans.  I wish I could start every single day that way.  Except for my old aching knees.  Seriously, my knees think they are 90.  I have been working out since Feb 1.  I started with a 30 day Shred, and have continued with other Jillian Michael's workout videos mostly, we are an accountability group of about 7.  We started off as a group of about 20, but there are still 7 of us working out every day with scheduled days off, checking in with each other.  It is an eclectic group of strong women in my life and I'm grateful for it.  Lawrence and I ran a 5K with a college friend a few weeks ago when his mom was here visiting.  It was really good, I ran the whole way finished in 33ish minutes, a 10:55 mile pace which surpassed my goal of not walking and finishing under 40 minutes! :)  A great accomplishment. 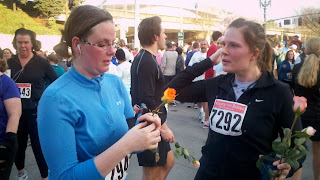 Work has been unbearable, so my wonderful husband, my beautiful kids, a few friends, exercise, God, and faith that things will get easier one way or another has been getting me through each day.

I want to come here more.  I want to feel like blogging.  I want to feel like writing and documenting the feelings that I have.  But that's not where I've been, that's not what I felt like.  So for now, I will come here when I can, when I feel like it.  Share what I want to, and not feel guilty for missing the past 5 months of stuff I've missed.  I'm learning a lot about myself, how much I can handle, and letting myself off the hook when I need to.  I really celebrated a good day on Tuesday.  In fact, this week has been the week first in 75 days when I won't meet the workout goals that I set in front of myself for the week, that I "only" workout 3 days this week, instead of 5.  As I took a long hard look at what motivates me, I realized that might mean I'm doing better, I've been clinging to exercise and the daily endorphins it brings like a life preserver.  It is something I can control and improve when everything else seemed to be unmanageable.  So does that mean not working out and eating 77 individually mini pastel wrapped Reeses Peanut Butter Cups is a good thing?  SURE!  That's what I'm going to tell myself anyway... 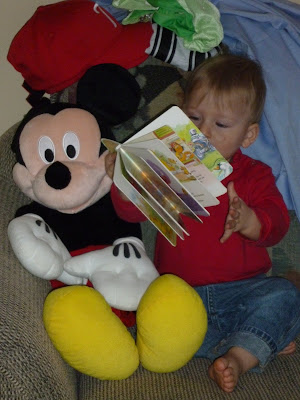 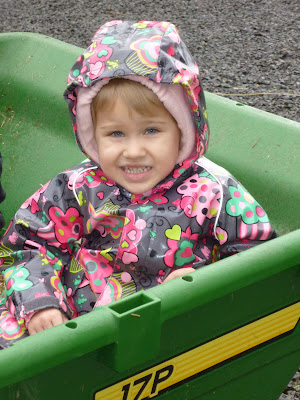 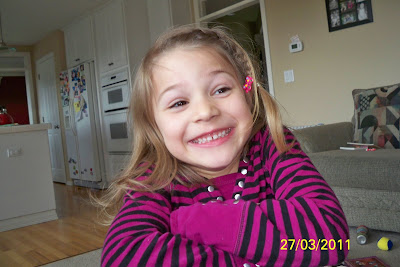 These Smiles
Make my world go 'round
Posted by Jenny at 6:10 PM 2 comments:

Photos from this blog

Thanks for stopping by

I am a 38 year old mother of 3 writing about my party of 5. I've been married for 12 years to my love, Lawrence. Our party lives in Portland, Oregon, and you know what, it doesn't rain as much as you'd think (she says at the end of August). Life is full and blessed and busy and hard and wonderful.
These are some of the reminders that help point me in the right direction most of the time...
Never wear your blessings like burdens
and
Do not let perfect be the enemy of good
and
Just be where you are
and
Be bold, and beautiful, and humble, and healthy
and
Just do the next right thing
Somedays are better than others but by looking up, diving in, and focusing on the hearts of Lily - 10, Addie - 7, and Bryson - 5 it is possible to go to bed more thankful each night than I was when we woke up that morning.